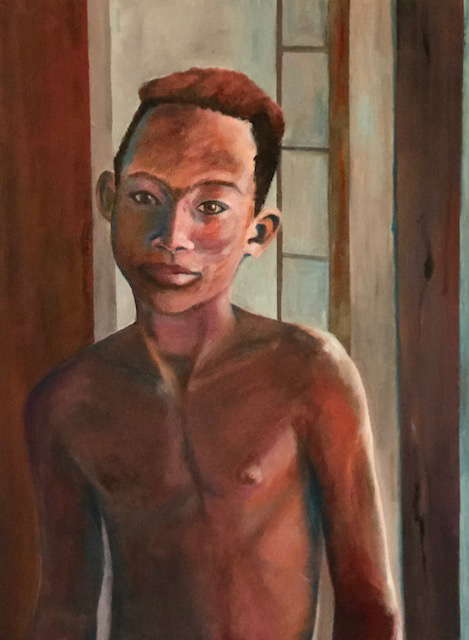 Young Cuban boy standing in the doorway at the Casino de Cuba Santaria building. Note the faded colonial blue of the frame.

Santeria (Way of the Saints) is an Afro-Caribbean religion based on Yoruba beliefs and traditions, with some Roman Catholic elements added. The religion is also known as La Regla Lucumi and the Rule of Osha.
Santeria is a syncretic religion that grew out of the slave trade in Cuba.

My paintings and photographs are of people with whom I have had a conversation and a momentary connection and who have given me permission to take their photo.

My passion is to preserve images of people not yet transformed by globalization. I want to document people who live a traditional life.

I hope you find beauty in the diversity of these world faces. I am available for commissions to paint your beautiful face too!

Marsha Hallet's original oils of global portraits are offered at the listed price + shipping. Note the shipping cost will be the rate at the time of your purchase. This may be different from what is quoted.

If you want a portrait of someone closer to home, commissions of your family and friends are welcome.

Archival giclee reproductions can be ordered.

Please complete the contact form to request specific information about a commission or purchase.

Order an image as a pillow, tote, phone cover, cards, t-shirts, and more.